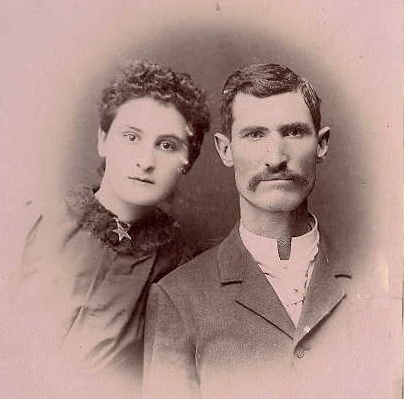 over here i am deep in the stories of my ancestors.

this personal history work feels urgent right now, so i am meeting that urgency and exploring my lineage.

i had no idea how a sense of curiosity, good research skills, a subscription to an online geneology service, and a dna test would bring together these pieces of me.  i've been consumed with uncovering the lives of those who came before me.  each new find opens a new (old) chapter and another piece that feels familiar and known and lived is clicked into place.

there are mysteries to be sure, and stories yet to unearth, but these are undeniably my people.  they are scots and quakers and apaches; immigrants and pioneers and mothers. they are warriors and english ladies, farmers and teachers; seekers of gold, seekers of survival.  there is love and adventure and murder and mad life skills. their trauma and their resilience live in my dna. i was shaped by each of them, biologically and spiritually.
i hope my life honors theirs.

here are a few tiny stories, in no particular order:

elizabeth, b.1731:  not to be out-badassed by her little brother (wilderness hero daniel boone) elizabeth was a courageous human in her own right.  her family lived within a fort deep in indian territory. they learned of an impending raid and wanted to give the natives the impression that they were unsuspecting, so daily fort life had to appear normal.  protected only by her wits and nerves of steel, elizabeth led a small group of brave girls from the safety of the fort to fetch water at a distant river, like they did every single day, with the knowledge that the indians were lying in wait, watching them.  this show of faux obliviousness boosted the confidence of the marauders and they attacked that night, and were met with a well-prepared and ultimately successful defense.

william, b.1725:  raised in the scottish highlands, william was a jacobite rebel, fought in and survived the battle of culloden.  he came to north america shortly after.

alzira, b.1830:  graced with dark exotic beauty and a foreign name, alzira made the covered wagon journey to san francisco during the gold rush with a months-old infant.  failing to strike gold, her young family settled on one thousand acres in sonoma county to work the golden land instead.  her husband died in california and she returned east to be with her family.  she had four husbands in her lifetime.

mollie, b.1860:  mollie was accidentally shot by wyatt and carried a bullet in her shoulder the rest of her long life.

john, b.1578:  schooled at oxford and cambridge, john had a "reputation for learning" and spent some time in "the clink" in london for pesky "independent thought".  he migrated to north america in 1634 aboard the griffin, his only recorded luggage:  "his books".

sarah, b.1646:  lived to age eighty, which was an accomplishment in the 18th century, and was noted in historical publications as "never had an aching bone or decayed tooth."

sea deliverance, b.1744:  she only lived one year, but pretty much has the best name ever.

also:  where i'm from