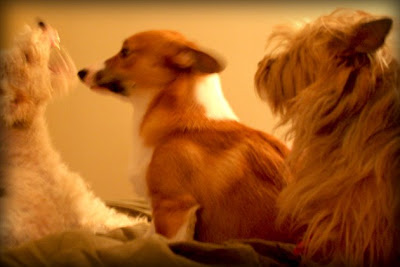 this is luca (the one doing all the barking of orders), my crazy wire fox terrier. he is giving simon (attentive corgi) and roxy (slightly nervous cairn) their nightly talking-to. we're not sure what he's saying (assignment of bed-hogging positions? who has the 2am drinking-out-of-the-toilet-so-loud-that-it-echos-through-the-house shift?), but it appears to be very, very important as he has their undivided attention. or maybe it's just his presence, his command, his confidence. or it could be that they know his terrier jaws will clamp down on their vulnerable bits in a ny second if they don't show the proper respect.

luca really does have a heart of gold. he is loyal like only a wft can be; just like his wft predecessor milo. he displays such tender affection most of the time. he finds balance in his role as the canine leader.

I am partial to luca because of his bossiness; it's a quality we share. what I'm learning is that while natural bossiness can be somewhat endearing when you are a petulant child or regularly mix it up with doses of humor, it becomes so much less adorable when you are the actual boss.
Posted by curious girl (lisa) at 7/12/2008